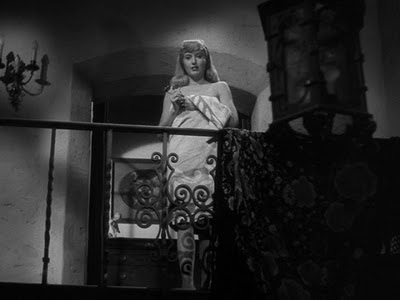 What's interesting about Film Noir is the adherence to the style, the formula. In many noirs the tone, characters and settings stay fairly consistent. Raymond Chandler has said he wrote his stories as a succession of "scenes". Fans of his fiction were familiar with the direction of the story, but it was the strength and imaginative use of the formula that proves to be enthralling. It's hard to craft a good noir; nuance and mood are essential elements.
Lately I've been watching and rewatching a lot of film noir. Some have been very good. And some have been very, very good. Billy Wilder's Double Indemnity is an almost perfect movie about imperfect people. He co-wrote the script with Raymond Chandler (Billy Wilder usually worked with a writing partner), and the dialogue is sharp and at times whimsical-"Murder can sometimes smell like honeysuckle..."
The cinematography by John Seitz is hazy with dark long shadows. There's plenty of the classic horizontal and canted shadows from venetian blinds. Motivated lighting with inventive use of shadows were trademarks of early German cinema. There are references to German Expressionism in film noir, if only because many German filmmakers immigrated to Hollywood in the 1930s and 40s. Billy Wilder began his film career in Berlin in the 1920s. One of my favorite expressionist techniques is as the drama picks up in a scene, as emotions heighten, the shadows deepen.
Even though there is a lot of expressive methods used in noir, the genre still has a naturalistic feel. I suppose the naturalism comes from the use of familiar settings and characters that are seemingly plain people. Viewers naturally connect to the characters, in that they are not heroes, they are imperfect and human. The protagonists are often seen engaging in a series of poor decisions and "stuck" in a situation which may not change. I believe the mix of stylization and the ordinary is what I find so compelling about Film Noir.
One of the plot devices that I remember vividly in Double Indemnity was Barbary Stanwyck's ankle. We see her first in a towel, and then her delicate ankle descending the staircase. I remember the ankle playing against the ornate iron rungs of the Spanish style staircase in her shadowed house. Fred MacMurray makes repeated references to the ankle, and her ankle bracelet. Like Claire's Knee, it draws the male protagonists into their fate, towards the direction the story will take.

I love the house in this movie, with all the dust and shadows. It's like a precursor to Sunset Boulevard, John Seitz shot that too. & Barbara Stanwyck is sooo good. A Femme Fatale is probably too tame to reference for her character. Although seductive, she is blunt when she describes her desire for her husband to be killed early in the film. Stanwyck is probably my second favorite actress (she's not The Queen), I do have favorites...