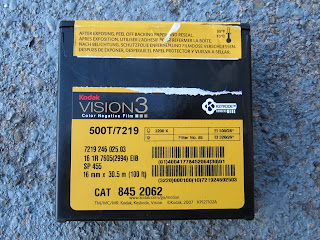 My brother Brennan came home from Japan for the holidays. It was great to see him (it had been three years). We had both studied film and made our own projects but we had never worked together. So we decided to shoot something while he was home. And we decided we'd shoot on film. I had made a couple of projects that were influenced by Douglas Sirk's melodramas, but I'd shot everything digitally. Sirk's films were shot in Technicolor and he really took advantage of the medium. His films were rich, saturated color. So we decided to shoot a one reel melodrama. We were visiting our parents up in Milwaukee and we had to make sure we had everything up there to do it. I got the Bolex out and cleaned it. I went to Xav Le Plae's Riverwest Film Video and bought a roll of Vision stock. The film was tungsten balanced and since we were shooting outside, I needed to find an 85 filter. I used to have some tucked in my camera case but they're long gone. Thankfully North American Camera had some filters and Bob, the proprietor asked, "Did you just wake up and decide to shoot a film?" We basically did. My friend Heather Vernon took the train up from Chicago to act in our little production. And together with a powder blue dress, we shot some emotive stuff in the park. There were some blowing leaves and everything (WOTW). It was a great day and I look forward to seeing our finished product. The roll is in the fridge awaiting processing (an old habit...).
Last month Kodak announced plans to file for bankruptcy. It was sad to hear but not surprising. When I worked at Helix I would get memos from Kodak regarding which products and stocks they were discontinuing (it was sad when they discontinued the slide projector). I never was too interested in a film/video debate. I enjoy and appreciate the facets and practice of shooting on both mediums. I'm planning on shooting my upcoming Science Fiction Noir on Super 16 and I know it's going to be pricy but I want to shoot my Noir on film. And I'm happy I still have the option to.
Posted by Claraalcott at 8:18 PM