I was born in a cloud, now I am falling, I want you to catch me


Kate Bush is coming out with a new album! It's called 50 Words for Snow, an album with snow and winter as a theme. Winter is probably my 2nd favorite season, after autumn. I know people have some issues with winter. A few of my long time Chicago friends up and left for warmer climbs because they've "had it with the winters".  I don't blame them.

I used to curate seasonal themed video shows at the Heaven Gallery. We would do a "Winter Screening" and serve hot chocolate. Prior to the actual shorts program there would be a group snow installation and different people would submit videos that involved snow. Anni Rossi would play too. I miss those screenings a little bit.

I love seasonal themed art projects and I love Kate Bush, so I'm excited about 50 Words for Snow. It's a little pared down from her last couple of albums, the songs employ sparse arrangements that involve her piano and her voice. In this song, Snowflake, she sings a duet with her drummer's son. His voice is the higher part. & speaking of kooky ethereal lady singers- Tori Amos also came out with a pared down album recently for the classical label Deutsche Grammophon. Night of the Hunters features acoustic instruments that also rely on her piano and voice. And she sings with her daughter.  They perform a song involving snow called Snowblind. 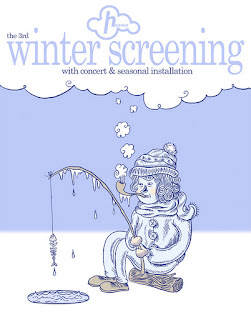 I looked through some of my old files and found one of the Winter Screening posters designed by Lilli Carre and Alexander Stewart. It's really cute, and reminds that I have talented friends :)
Posted by Claraalcott at 4:03 PM