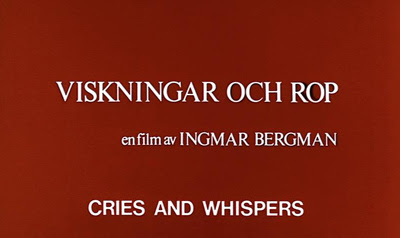 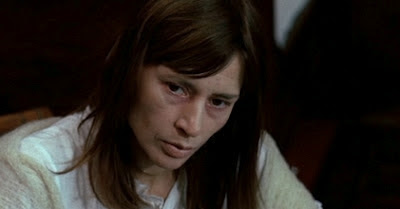 Some notable filmmakers have used red as a visual facet in their films. Krzysztof Kieślowski's Red, Michaelangelo Antonioni's Red Desert, Zhang Yimou's Raise the Red Lantern and Igmar Berman's Cries and Whispers to name a few.
In Cries and Whispers red is prominent throughout, from the titles cards at the beginning and the slow fades to an opaque red. The story takes place primarily in a villa with red walls and red carpeting. There's red in Liv Ullman's hair and in the blood of an unhappy sister who cuts herself in acts of self-harm. The red contrasts against the women's stark white costumes and against the rigidity and decorum under which they feel they must conduct themselves. There is a death at the center of the movie. The theme of death, of quiet and hidden feelings hangs with a heavy hush over the film. But the red is always there as a visual reminder that very real and living blood is coursing just under the skin.
The film focuses on three sisters. Agnes is dying of cancer and her two other sisters, Maria and Karin, came back to stay at their family's house to sit with her and be with her until the end. The film opens to quiet, just a ticking clock can be heard. Agnes lays alone in her room and her sisters are just outside in a formal sitting room. They wear high collared white Victorian nightgowns. Liv Ullman lays like a Bodecelli, her red hair flowing down her shoulders. 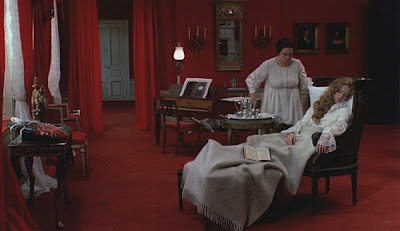 The sisters, although in mourning, are also addressing the distance in their relationships and the result of living lives closed off from expressing their feelings. The only one who is more open is Agnes who is dying. After she dies she "wakes up" and she calls for her sisters to come and be with her because she is so scared. This surreal and unnerving sequence made me sit up while watching it. Although it may be a dream in the story, the naturalism in the way the sequence is staged is freighting. I love it. It reminds me of the scene in Cocteau's Orpheus where Death's Chauffeur tells Orpheus's wife that he hates the smell of burning because he had been cremated.
Agnes's reanimation forces all three sisters, for a time, to address their lives and express their feelings. And to address the relationships between themselves and the experiences they had as children with a distant mother. Bergman movies can be chilly but there is some warmth when the sisters come together. 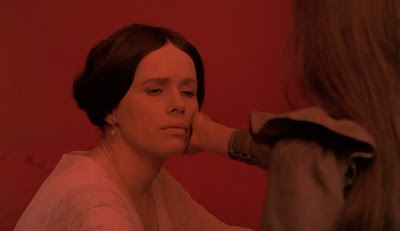 There is a lot of feminine energy in my family, there's a lot of sisters, cousins and aunts. A Southern family, we come back together to support each other during trauma and illness. We sit together, read, clean and cook. The support and relationship between women is one of the themes that comes up in my short film Reds and Blues. The idea that women can be supportive of each other rather than competitive. To attempt to reach out rather than let things go.

I like the press and set photos from Bergman movies. I see those stoic faces looking so happy. And maybe everything is going to be alright.

Cries and Whispers, Ingmar Bergman  1972
Posted by Claraalcott at 10:56 AM