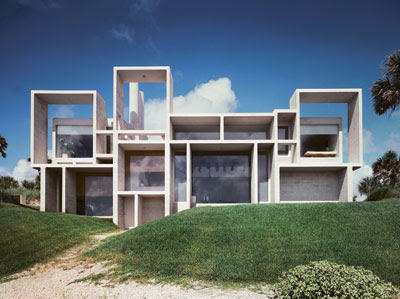 In my research for my Sciencefictionarchitecturenoirfilm, I tumble into this undisciplined rabbit hole of research. I should be getting back to the actual script, concentrating on structure and writing. Initially I was self conscious about writing for characters as architects when I felt I knew little about architecture or design. I grew up in Wisconsin where every art teacher was quick to remind that Frank Lloyd Wright was from our home state and that architecture was something that was genius and dramatic. When I began my script I knew that I wanted my characters to be artists which led me to think of the most visual and firm art form I could think of. And over the years of writing and researching I've just fallen love with architecture. I love buildings. I get sidetracked as I delve into different styles and eras.

Often there is a Brutalist bent to some of the architecture in science fiction, like in this still from  Blade Runner.

Brutalism in real life can often feel dreary, I think of the UIC campus in Chicago. It's grey upon grey in a grey city. But I came across the work of Paul Rudolph, his work has a lighter touch to the brutal style. And speaking of architectural heritage, he is from Elkton, Kentucky, which is where my father is from (a rather random place for an architect to be from as there's not a lot of buildings there or anything else for that matter). He designed the white blocked building at the top of the post, the Milam house in Florida. It reminds me of Michael Mann. Like a house that would be in one of his movies, airy white and stark. Someplace where the guy that's been a bank robber his whole life retires to before he's pulled into one last heist. Or where the well-connected dealer stays. Or the house where William Petersen lived in Man Hunter.


Speaking of Man Hunter, THIS is awesome. This is my favorite scene from the movie. There's a lot of great things going on (like the ripping of the nylon off the dash), but I love how the door glows behind Joan Allen's head.

Posted by Claraalcott at 8:00 PM