Shooting in an asphalt jungle 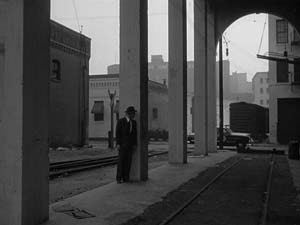 Developing a feature film is like climbing an invisible mountain. The uncertainties far outweigh what is known. The only thing that an independent filmmaker initially has on their hands is time. And then if any kind of financing comes through and a production is viable, there will begin the process of working in the most difficult schedule. & then if creative decisions have not been made, there is no time to dwell on them and things can be lost. So I am trying to concentrate on decisions now, like the look and locations of the film. I really want to make the city almost a character and strong backdrop for the actors. Chicago is hard, dark, concrete and steely. Shooting in an asphalt jungle it would seem. (A jungle is a metaphor applied to Chicago from time to time...) The film noir Asphalt Jungle, was a good place to go for inspiration-

The opening shots of Asphalt Jungle are shot on location. The film does not specify where the story takes place except that it's a city in the Midwest. The opening was filmed in Cincinnati. The author of the novel, W. R. Burnett, was from Ohio before moving to Chicago. The photography is great. Arthur Rosson, the Director of Photography, was adept at shooting a nice tight, B&W noir (he wasn't a slouch when it came to color either, he shot Wizard of Oz and Singing in the Rain). The exteriors at the beginning are open and vast before the film goes inside to the low angles and tight shots that fit the claustrophobic feel of the story. Sterling Hayden is running from the police and the architecture of the city works with him as he ducts behind buildings and into shadows. 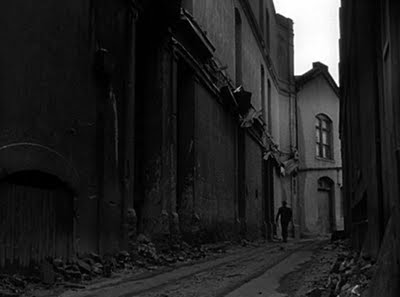 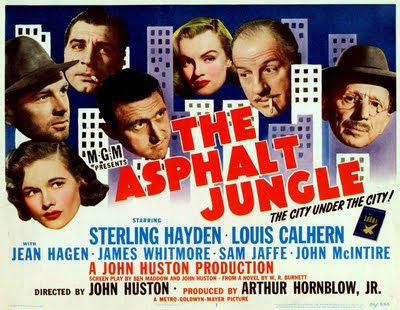 The Asphalt Jungle is a nice, dark noir. Directed by John Huston, it has a silent jewel heist that is referenced in later films. Plus there's an early appearance by a young, cute MM.
Posted by Claraalcott at 9:36 PM